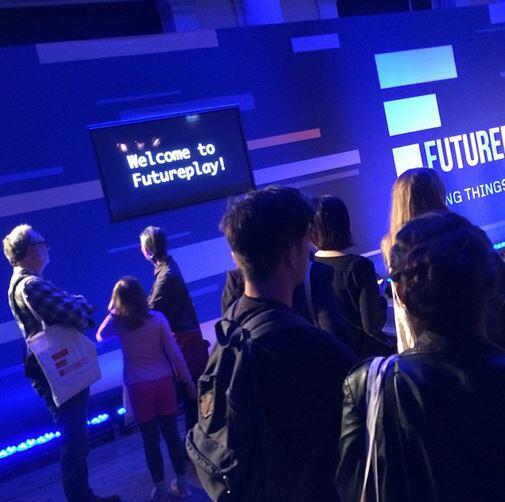 FuturePlay was an interactive and immersive theatre/game show I made while working on an internship with Coney, in September 2013. Tailored for Nesta’s FutureFest in Shoreditch Town Hall, London, we created a three-act show, where the enigmatic Frankie Kuniklo kicked the event off with a talk on play in the future. The second act entailed an action-packed hour-long show, where an audience/players of 70 to 80 chose one of three startup companies (Playify, Glitchspring and >CC) as their team, played a set of games which reflected possible future scenarios revolving around play. and eventually uncovered an unexpected mystery.
Futureplay culminated in the third act, which entailed a trail of clues, phone calls, texts and playful secret agents around the area of Shoreditch.

I worked mainly with the director Tassos Stevens, game designer Will Drew and actor Brian Ferguson, as the core creative team, as well as the rest of the FuturePlay team. I helped design the games, the flow and dramaturgy of the entire piece, and I designed the third act.

Rabbit may or may not have been present.

Some Interesting Links to Pore Through:

The Intern Ship
Early Days (of a better nation)